Covid-19 Road Closures and spotlight the community of Duluth

Last week BikeMN held our July Bike Walk Leadership Webinar. The network connects local leaders to share stories and ideas about how to best uplift biking and walking in their respective communities. This month’s theme was Repurposed Streets: Paving the Way to Long Term Mobility Solutions. James Gittemier from the Duluth-Superior Metropolitan Interstate Council and Chris Meyer from the Minneapolis Parks & Recreation Board joined the webinar to discuss road closures during COVID-19 and what lessons they’ve learned from repurposing streets for pedestrian and cyclist use.

The city closed several miles of streets to traffic in order to avoid overcrowding on existing trails, and to encourage residents to be active outdoors. James highlighted that the changes were made surprisingly swiftly. Another positive was that the closures resulted in increased access for children and the elderly. Skyline Parkway, one of the closed roads, saw roughly 350 pedestrians and cyclists per day.

The road closures did present some challenges, which James noted — USPS routes were disrupted, and those with mobility challenges saw a decrease in access. Nonetheless, James was hopeful that in the future, these challenges could be seen to and more roads can be repurposed for multi-modal usage.

Chris Meyer, Minneapolis Parks & Recreation Board, has never driven a car in his life and doesn’t plan to get a license. He’s originally from South Dakota but moved to the Twin Cities because of our bike-friendliness.

Prior to COVID, Chris campaigned hard for the Park Board to experiment with temporary road closures across the 48 miles of roads the board owns. After frustratingly little success, beginning in April, the Minneapolis Park & Recreation Board approved road closures to encourage safe, social distancing on area lakes and parkways.

Although there was an adjustment period, the Park Board learned important lessons during the early days of the road closures. 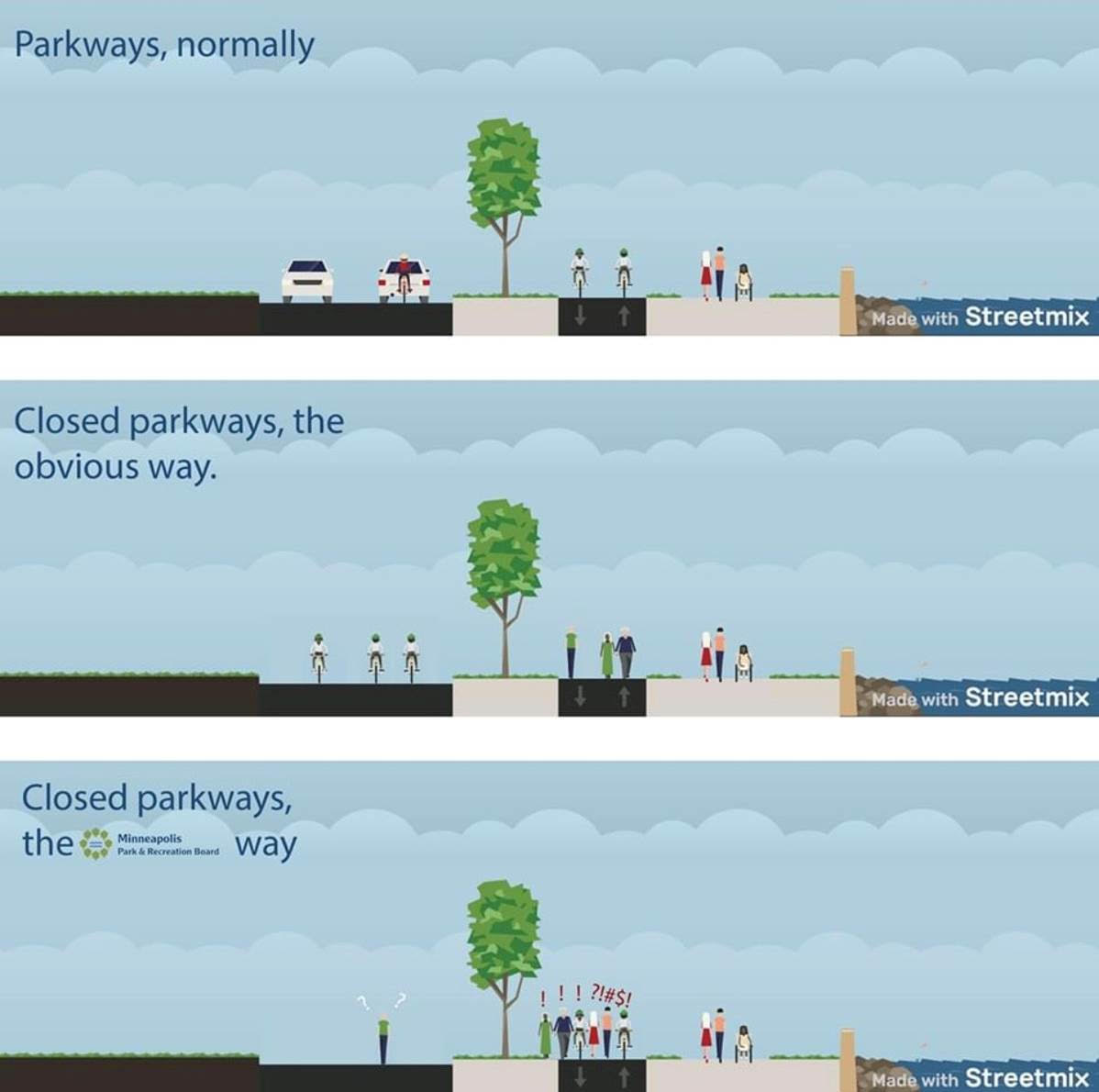 For example, the board originally closed many of the parkways to two-way traffic, allowing cars to occupy one lane, and asking that only pedestrians utilize the now-empty other lane. As fast-moving bicyclists continued to use the now car-free roadway, the board reconsidered their system. The four-foot cones used to separate traffic, moreover, proved too expensive.

Instead, the Park Board opted to either fully close roads or relinquish them to vehicle traffic. This proved to be the most cost-effective solution, which has stretched the allotted $250,000 budget to allow for certain roads to remain closed through August, 1.

Chris stressed the necessity of long-term, more permanent solutions in order to allow for road closures going forward. Right now, the Park Board is taking comments on their 10-year plan, “Parks for All.” Chris encourages Minneapolis park users that appreciated the closures to voice that to the board.