Part of the work plan I will follow during my term as a Minnesota GreenCorps member at BikeMN calls for me to develop 1-2 ride templates for Colleges and Universities. These templates will be used by students, staff, and faculty on any campus, to create a group bike ride. Research indicates folks on Higher Education campuses would be more willing to bike if they had someone to ride with, so creating a template to facilitate group riding on Colleges and Universities is a project I have been excited about completing.

Yesterday afternoon, I tested out the template for the first time with a Minneapolis Community and Technical College (MCTC)-centered, 35-minute slow roll around downtown Minneapolis. I began the ride at the corner of Harmon Place and Maple Street because I knew the area would have enough room for riders to gather before the ride if this were an actual group ride. Part of the template calls for riding on new bike infrastructure, so I rode a block northeast to Hennepin Avenue and used the new bike lanes on Hennepin Avenue/Dunwoody Boulevard to reach Parade Park. 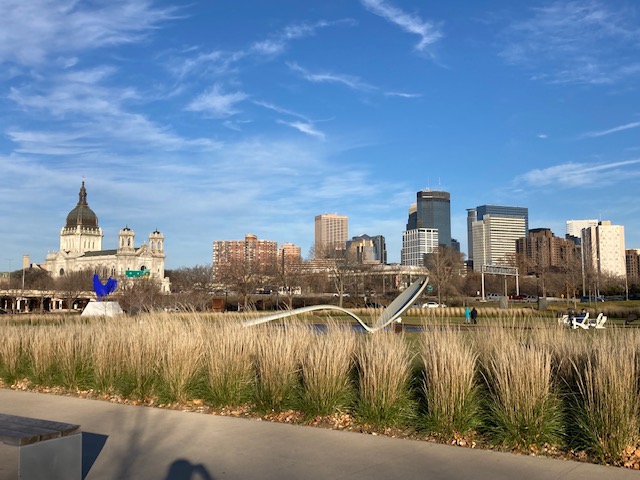 I biked the trails along the perimeter of Parade Park to the Minneapolis Sculpture Garden, because the template calls for highlighting green spaces on and near campus and because I wanted to see the cherry-less spoonbridge.

I biked the next segment of the ride on the south edge of Loring Park and through the Loring Park Neighborhood on 15th Street, highlighting more green space as well as dense housing where many students who attend Minneapolis College live. Here, I was disappointed to see the bike lanes had been removed and replaced with parking.

I biked the next segment of the ride on the south edge of Loring Park and through the Loring Park Neighborhood on 15th Street, highlighting more green space as well as dense housing where many students who attend Minneapolis College live. Here, I was disappointed to see the bike lanes had been removed and replaced with parking.

The ride template directs group ride organizers to highlight public transportation hubs, so at Nicollet Avenue, I turned left and rode through downtown to the Nicollet Avenue Light Rail Station. Nicollet Avenue is not a bad way to connect to the light rail if you do not mind riding in bus traffic. From the light rail station, I continued north past the Central Library and a new high-rise being built next to the library until I reached Washington Avenue. At Washington Avenue, I turned left and enjoyed the curb-protected bike lanes along Washington for a block before turning left again on Hennepin Avenue.

Biking the downtown stretch of Hennepin Avenue was the segment I was most excited about when I used the ride template to create my Minneapolis College-centered ride route. The template calls for highlighting good bike infrastructure and I wanted to test out the new curb-protected bike lanes on the downtown stretch of Hennepin Avenue to determine if these lanes are good bike infrastructure. (I’m giving these bike lanes an Incomplete, because they were amazing but there were very few pedestrians on the street so I don’t know how they will work when more people are present.) Hennepin Avenue also now provides a curb-protected bike route between the light rail (Warehouse District Station) and Minneapolis College.

I closed out the ride by biking south on Hennepin Avenue, past the Bulldog Bar & Grill, Dominos Pizza, Subway, and the Lunds & Byerly’s grocery store a block away from campus. At Spruce Place, I turned left again and rode back onto campus on the path between the Helland Center and the T Building, making my way to the fix-it-station on the Commons near Whitney Hall.

Learn more about Tim, BikeMN’s GreenCorps Member for the 2021-22 season!